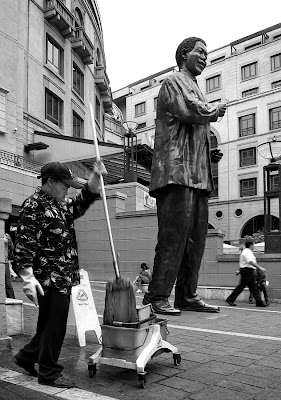 Posted by Peter Bendheim at 00:54 1 comments

(The Ark was a controversial christian shelter in the Point Road area of Durban; a refuge for homeless people. The Ark was closed amidst considerable press debate. This photo essay and article was published in Camera and Image Magazine, Dec 08/Jan 09 issue)

The landscape is a recurring theme in art over the centuries, and in the more recent medium of photography, that also holds true.

But like all creative expression, be it in literature, painting or photography, ideas move on, evolve and shift. They do so partly because the world around us has changed, and partly because our consciousness of that world has altered. If one looks at the expansive English landscape paintings of the 18th and 19th Century, they expressed a form of grand idealism about the world, firmly based in the creator and creation, sylvan in their depiction of world. Green fields, pastoral scenes; the golden glow of a perfect landscape; canvasses that are almost heaven on earth.

In a similar vein, photography in the earlier part of the 20th Century developed along similar themes, and these themes still endure today in many forms. Consider, for example, the work of Ansel Adams – those beautiful landscapes that celebrate the romantic vision of a virgin American West. In many of his images of Yosemite, taken in large format in black and white, the lighting and composition reinforces the essences of the Great American Dream; a pioneering affinity with the outdoors and the creator.

The romantic landscape endures today, and it evokes strong feelings in all photographers, even if those emotions are sub-conscious. I don’t think there is a photographer who hasn’t, at least once, been able to resist the compelling attracting of a golden sunset or the reflections of trees in the water of a perfectly still morning lake. There are thousands of offices and homes adorned with wall calendars depicting perfect scenes bathed in idyllic light to uplift us from our dull desks and piles of papers. As a youngster, I remember my relatives keeping chocolate boxes with alpine and lakeside scenes to store the sewing kit in – a visual break to remind one of how life might be if one wasn’t sewing on buttons or darning socks.

While those photographs are pretty and romantic, many photographers in the latter part of the twentieth century began to question their relevance to the world most of us actually live in. It’s one thing to construct and present this perfect world, and another to find that when we frame the image, we have to duck to avoid the electricity pylons in our viewfinder, or move a little to the left to dodge a factory or cluster housing estate. And then, there is always Photoshop to correct those blemishes on the landscape in a digital era.

The fundamental shift in landscape photography came about when a number of photographers started recognising that we live in a world that has been altered by man; that it is almost impossible to go anywhere and find the unspoiled idealistic romantic environment that earlier artists so tenaciously clung onto. In the 1970’s photographer Stephen Shore published a groundbreaking book called “Uncommon Places”. In “Uncommon Places”, Shore shows a very different set of American landscapes to those of Ansel Adams. They are images of small towns in America, detailed photographs of supermarket parking lots, shop fronts, housing estates; natural scenes all imprinted with the influence of man and the cultural landscape on the natural landscape.

Shore calls this “conscious attention” “It is,” he says ”a condition of seeing the world in a heightened state of awareness. I think most people have walked down the street and for a few minutes everything looks brighter or more vivid, or space and time feels more tangible; things seem more real.”

Robert Adams, Lewis Baltz, Joel Sternfeld and William Eggleston are all great photographers who revolutionised the medium in the latter part of the 20th Century with similar approached to the medium. Photographers such as Robert Polidori have also created wonderful landscapes in his books on Havana and ruins of Chernobyl.

I can distinctly remember when I first saw these images in a 1977 Time-Life Photography Yearbook so substantial was the impression they made on me. In the world of art and photography, however, that was three decades ago, and there has been substantial evolution since then. On one end of the scale, recent landscape photography has been concerned with realism in everyday life, on the other, the manipulation of imagery that has become so much easier with the digital age has allowed the construction of completely imaginary and fabricated landscapes.

Realism versus fabrication is a whole moral and ethical debate in photography, but that’s a debate we can pursue in the future……


The traces we leave behind…..

“…these old buildings are about to undergo a construction metamorphosis that will see the Point Waterfront area become home to a brand-new brick and glass shopping centre topped by modern offices and serviced by undercover parking.”
From Property24.com, 2006

Cities are continually changing and evolving, with parts of them destructing and reconstructing. Like most of life, they never reach a stage of completion, as does a baked cake. As cities and the buildings within them evolve organically, they leave traces of their former uses behind. Sometimes those uses are memorised in whatever new use the building is put to. The form is retained but the use changes, as in the case of an old warehouse that becomes a shopping mall.

I’ve been fascinated by the traces of people that once occupied spaces that are now abandoned and awaiting transformation, in part because those traces are fleeting, and I wanted to record them as urban landscapes in a documentary way.

These images were taken at a shelter, known as the Ark and located in a former barracks for stevedores in Durban’s once notorious Point Area. Run as a Christian mission, it provided shelter for homeless and destitute and desperate people. It was, over the years, shrouded in controversy, but remained a landmark in Durban for the urban poor. When the city redeveloped the Point area into a modern precinct of luxury apartments and office blocks, the Ark residents were served with an eviction order. Plans to move the residents to an area in Montclair, a residential community, were met with considerable resistance from residents. In the end, and after all the debate, the residents of the Ark were dispersed across the city, some even ending up in Cape Town. They were never moved en masse to a new location.

The promised new shopping and office mall complete with wine bars, restaurant and exhibition space was supposed to have been constructed by the end of 2007. At the time of writing most of the internal fittings have been removed by demolishers; little else seems to have taken place.

Despite this building having been in the hands of the demolishers, I’m amazed at how many traces of its emotional content has been left behind. Slogans on the wall testify to the occupants recording of their religious beliefs on walls that once towered above beds, old cards and posters have been faithfully photographed exactly where I found them, and signs of human habitation are still to be found in the small detail and in the spaces people once occupied. Plants and weeds grow through the rubble, testament to the power of nature to finally re-conquer all that man builds.

Whatever is built there will also have a lifecycle, and an end date. No matter how bright the chrome, or shiny the glass, it too will in years to come, be a pile of rubble, and a collection of memories, both good and bad, for the people that occupied and used it. 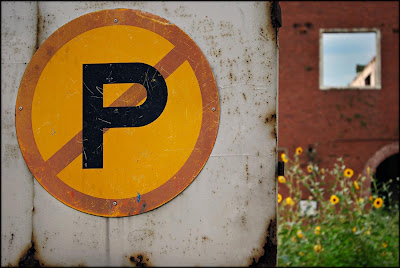 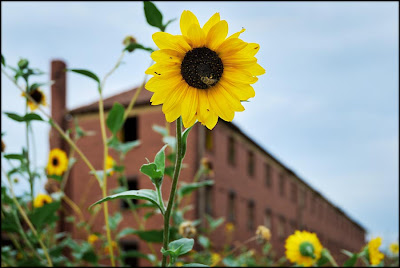 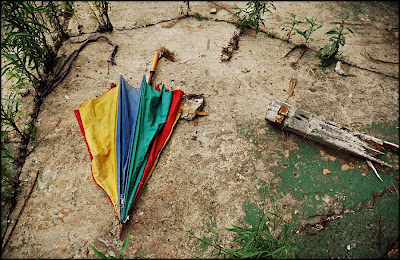 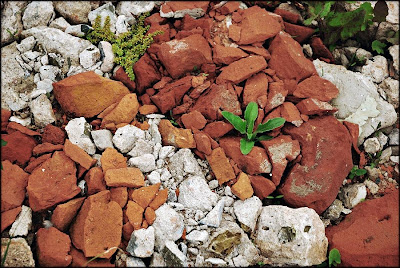 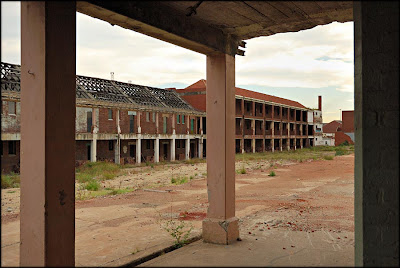 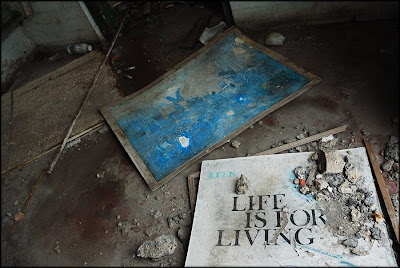 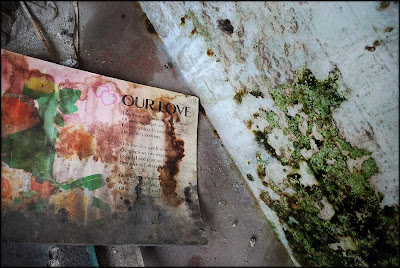 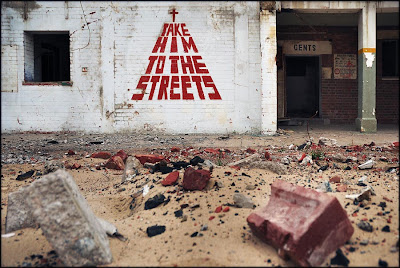 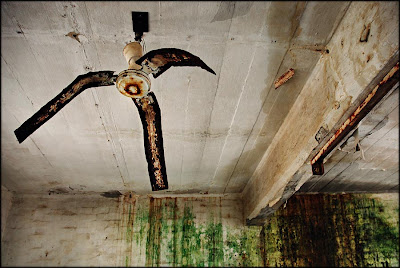 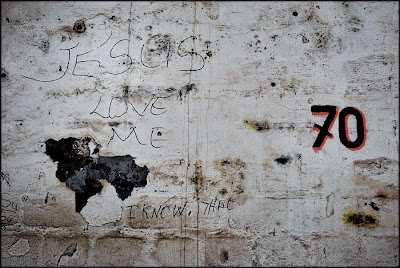 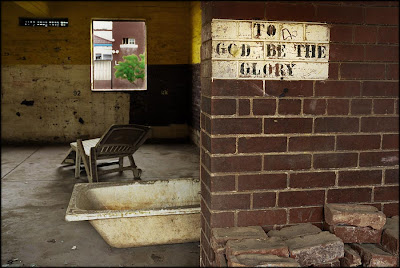 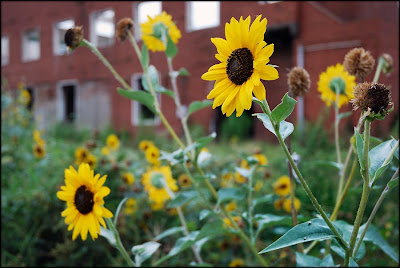 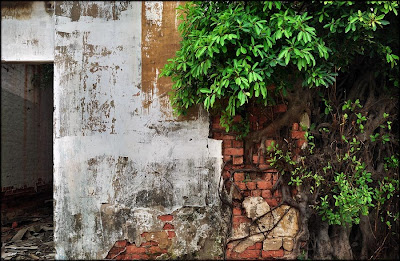 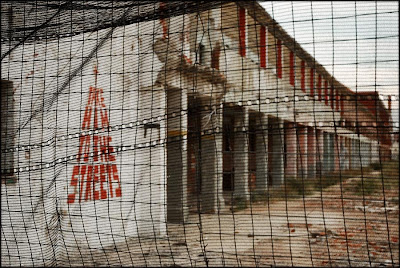 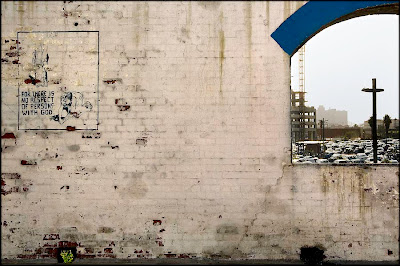 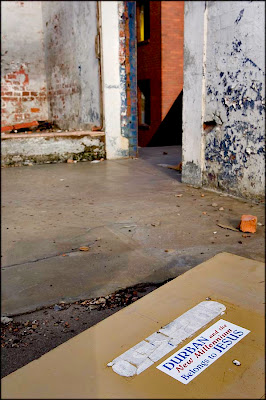 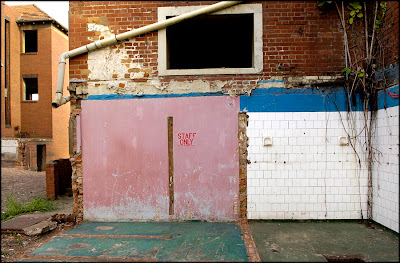 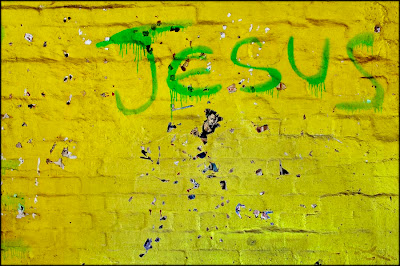 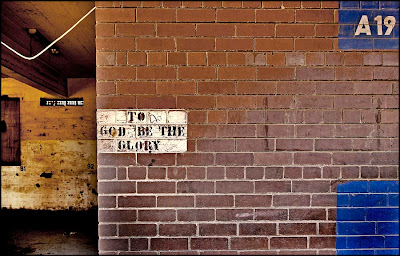 I'm a documentary photographer in Durban, South Africa. I am represented by Africanpictures.net and have had several exhibitions and published in numerous magazines. My website is www.peterbendheim.com

All images are subject to strict copyright and may not be used for any purpose without permission. This includes the downloading and/or storage of any images on any device. Contact me for use rights..... peter@peterbendheim.com

FOR A BETTER VIEW CLICK ON IMAGE TO ENLARGE